Climate change and its impact on agriculture in Bulgaria

How do climate change and global warming affect agricultural production in Bulgaria?

Europe experienced its hottest summer in 2021, accompanied by severe floods in Western Europe and dry weather in the Mediterranean, According to a recent report by the EU’s Copernicus Climate Change Office (C3S). „Although 2021 was cooler than 2020, it was still one of the warmest recorded for our planet. The last 7 calendar years, including last year, were the warmest ever recorded, ”said C3S CEO Carlo Buontempo.

What does science say about climate change and global warming? And how do they affect agricultural production in our country? Agri.BG sought answers from scientists, farmers and agronomists.

The world scientific community has united around three main statements about climate:

This was explained by Kristian Panayotov, an expert in the field of natural resources and climate change with many years of research experience in climatic features and soils in Bulgaria, Denmark and some African countries. He has participated in many programs and projects for the restoration of natural areas; monitoring and evaluation (M & M&E); protection and adaptation to climate change, protection of water resources, and others. In 2020 completes a PhD project on „Climate Data Modeling“.

The expert made an important clarification that the conclusions about climate change are based on „climate modelling“, which uses supercomputers, hundreds of parameters and data over a long period of time. They can be both global and regional (eg Southeast Europe).

Why is climate important and are these changes important?

„We will give an example to illustrate how important greenhouse gas CO2 is and how crucial its role can be for the temperatures we depend on. For there to be life on Earth, everything must be in perfect balance. For example, the average air temperature should be about 15 ° C, carbon dioxide (CO2) in the atmosphere – about 0.04%; plenty of organic carbon, liquid water, etc. By comparison, Mars has almost no atmosphere (about 1% of Earth’s), and carbon is „locked“ in the ground in an inorganic state. There the surface temperature is about – 63 ° C. On Venus, the atmosphere is much denser than on Earth. It is built mainly of CO2 and the average temperature is around + 470 ° C „, explains Panayotov.

What we are seeing now is that the average temperature is definitely rising. For the period 1850 – 2020, we measure the warming of the surface by about 1.5 – 2 ° C, and some places are more affected than others. Unfortunately, our region is significantly affected, with years with average warming above 3 ° C compared to baseline values.

In this sense, the answer to the question: Do people have the power to influence the climate? Yes! (Figure 1). With the change in the levels of greenhouse gases in the atmosphere, as a result of human activity, the values of the temperature also change. The two are absolutely connected! 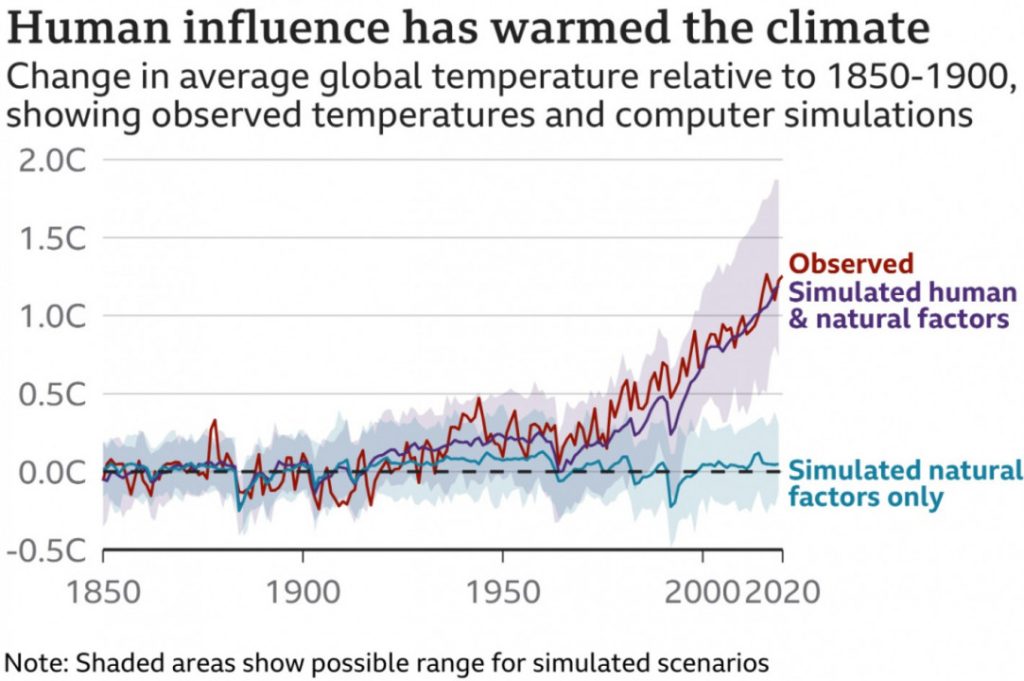 After decades of research in the field of the climate system, scientists from individual institutes get almost the same results (Chart 2). By increasing the concentration of CO2 (and other greenhouse gases) in the atmosphere as a result of human activity, the climate is changing. 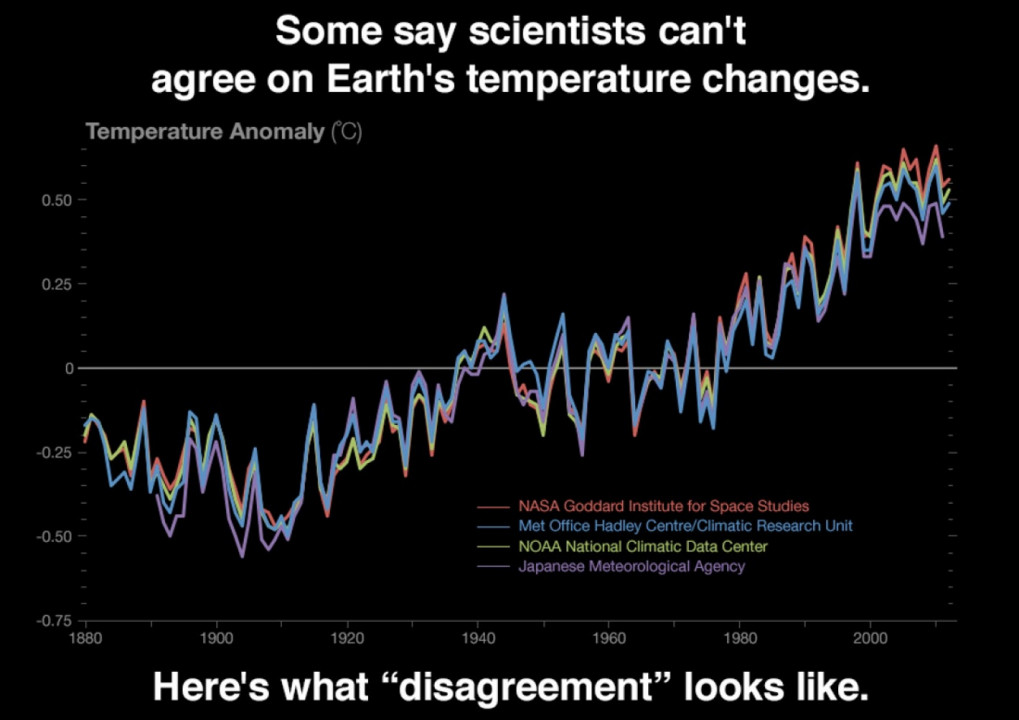 Where is Bulgaria in the global picture?

A number of regions (including Bulgaria) are falling victim to climate change, mainly through rising temperatures and uneven rainfall throughout the year. As a result, the frequency of extreme events such as droughts, floods, forest fires, landslides, dangerous gusts of wind and others is increasing.

In 2018, the European Union published a report assessing southern Europe with a high risk of desertification.

In this phenomenon, there is a drastic loss of soil resources due to droughts and poor management, the land degrades and semi-deserts are formed. According to the report, the most affected areas in Bulgaria are those with the most intensive agriculture – the Northeast and North-Central regions, the expert explains.

According to the hydrometeorological report on the state of the climate in the country, 2019 and 2020 are the two warmest years since 1930 (NIMH, 2021). In 2020, the average temperature for the country is 12.4 ° С, which is 1.9 ° С higher than the climatic norm for the last 50 years of the XX century (Chart 3). And the average maximum temperature is 2.9 ° C above the norm, which shows that the trend in recent years is a rapid rise in maximum temperatures. This is most pronounced in the summer months, which dramatically increases the risk of extreme droughts. 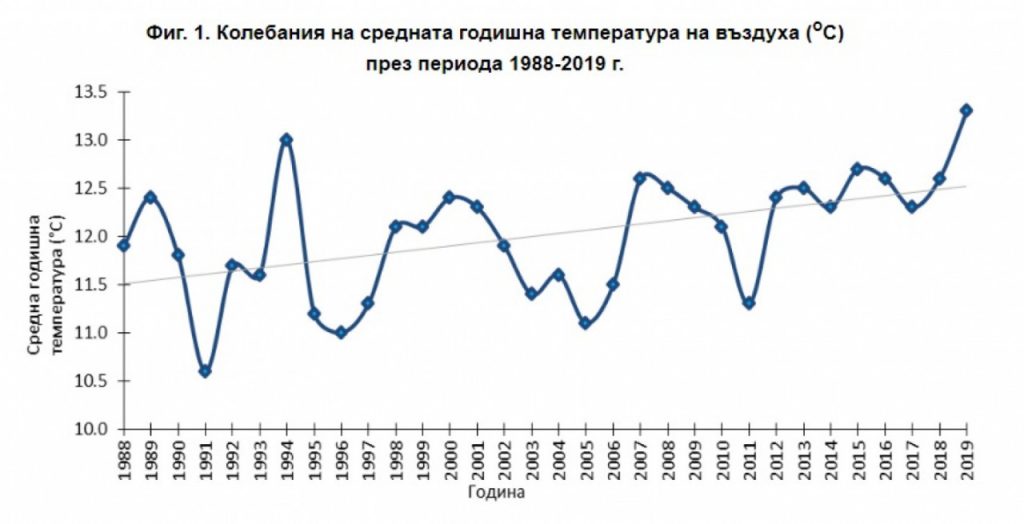 Stefan Grozdev, agronomist and specialist in organic farming and berry crops, is adamant that in recent years there has been a noticeable increase in average annual temperatures and uneven distribution of rain: „We have rainy periods with large amounts of rain, especially during the growing season. Entire fields suffer from drought and high temperatures, „Grozdev said. 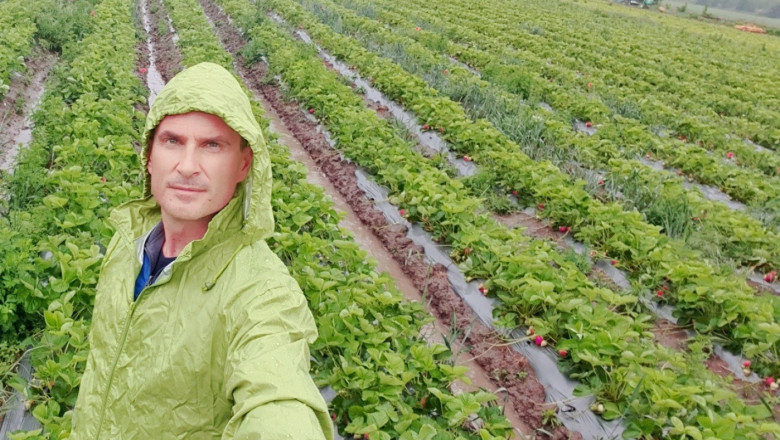 Recent years have shown that raspberries are not particularly suitable in many of the areas where they are grown. They continue to be grown with varying degrees of success because large tracts have already been created. Some of them also have processing enterprises. In the case of remontant raspberry varieties, the problems occur during the warmest months of the year.

An example from the summer of 2021 is my experience with a strawberry producer in Samokov (Rila). Then there was a precedent for this agro-climatic region at 950 m above sea level, in which temperatures were above 37 – 38 ° C for 20 days – a phenomenon that had not been observed until then. There are many producers of raspberries and strawberries in the region, and these conditions have affected both crops. The raspberry literally stopped blooming. Almost the same happened with strawberries, which had a strong influence on the flowering, ripening and ripening of the fruit. So climate change is already being felt in the higher parts of the mountain.

The agronomist’s observations regarding the precipitation are confirmed by the climate change expert Kristian Panayotov:

“Another interesting observation about the expected changes is in the precipitation/rain/snow regime. Unlike temperature, precipitation values are quite variable. The annual rainfall for 2020 is 594, which is 93% of the climatic norm for the period 1961to 1990 (NIMH, 2021).

The trend that is observed is that precipitation in the summer months decreases, but in the fall, they increase. This increases the risk of prolonged drought (in combination with much higher maximum temperatures) and floods in autumn and spring. The days with snowfall are also decreasing, which leads to a measurable thinning of the snow cover over the country „, explains Panayotov.

In this line of thought, the rainy days over Sofia from rain and snow have dropped to 61 for the period 2015-2020. (Source 6). This is a huge stress for nature because within 1 year we have a stockpile of precipitation in the colder months and a lack of such in the hottest.

Global warming, the increase of the average temperatures and the limited precipitation are felt very strongly, the farmer Alexander Dimitrov, organizer of production in the cooperative in the village of Brashlyan, 1500Ha of land. 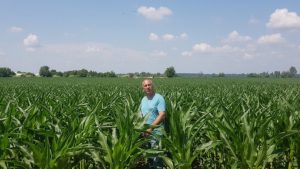 „We all see clearly that the climate in recent years has nothing to do with what we had as a climate 10 or more years ago. Many climatic phenomena do not have a recurrence, as each year is different.

Rainfall became very unevenly distributed during the season. For example, I will give you that in January, February and March (months that are characterized by snowfall), on our farm we have a total of 26 litres / sq.m. At the same time, we have 76 litres for April. The months in which we must have serious moisture storage of snow and rain, it is missing. We see anomalies in the onset of the 4 seasons. Every year they occur at a different time „, Dimitrov shares his impressions.

The farmer also says that in the last 2 years there have been observations of serious wind erosion: „Winter due to lack of snow and strong winds, there are days when we were in the desert – dust in the air, which is actually humus, surface and the most fertile soil layer. This is a big problem. “

Kristian Panayotov points out that another factor that contributes to the negative impact of climate change is that in Bulgaria we have large areas without forests or any perennial vegetation.

The „naked“ landscape can turn into a semi-desert relatively quickly, the expert is categorical: A 12-15-meter tree, for example, has a root about 3-4 meters deep. It has a mechanism to retain moisture at this depth. In a period of drought, it begins to release moisture – through the leaves and gravimetrically thus creating a cooling effect. This is practically a free mechanism to deal with the effect of high temperatures and long periods without precipitation.

In recent years, we really have had problems with the climate, says Assoc. Prof. Sava Tabakov, Dean of the Faculty of Viticulture and Horticulture at the Agricultural University – Plovdiv: „The typical winter – snowy, cold – from December to mid-February is gone. Colds occur in late March, and April, which is not typical of our climate. For this reason, fruit species come out of dormancy very early and begin to develop, thus reducing their cold tolerance. We are suffering great damage – I would not even say from frost but from frost. Low temperatures of -8, and -10 degrees, which persist for a long time, lead to serious damage to early flowering species. The situation is very different in each region. There are regions in northern Bulgaria where frost is not significant, but there are also those where the damage is 100%. This phenomenon, which compromises the harvest, has been observed for 4-5 years in a row.

The words of Assoc. Prof. Tabakov is also confirmed by Nikolay Kolev, fruit grower and chairman of the Union of Danube Fruit Growers:

„Climate change is affecting the fruit sector. In recent years there has been a massive frost in early and partial frosts in medium-early varieties of fruit species. This year is no exception: January and February were extremely warm, and in March there were return frosts with temperatures up to -10 ° C – detrimental to apricots. 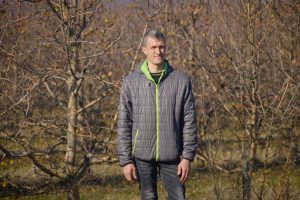 Winters in recent years have been warm. With these warm winters, there is nothing to keep the trees dormant long enough to go through the critical period. At 7 ° C, the vegetation takes place in the trees, the bud develops and at the slightest warming, the bud starts to open. In the ensuing cold of March and April, as has happened in recent years, the bud freezes. The orchards along the Danube have been largely protected from fog, but there have been no fogs for several years to keep temperatures low. We hope that these climate changes are part of a cycle that will pass in a few years, „said Nikolay Kolev.

The National Report on the State and Protection of the Environment in the Republic of Bulgaria (2011 edition) sets out scenarios for climate change in Bulgaria at the end of the 21st century. They think: