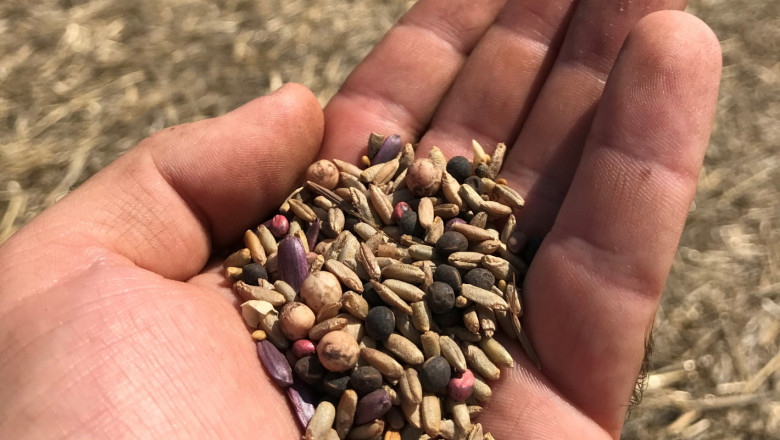 When and how to choose the right mix of cover crops? When is the best time to sow them? When to terminate them? – The answers to these questions are given by the specialist in conservation practices Boris Koev in the second part of the interview dedicated to cover crops.

The most important thing is to match the choice of cover crops with the technology of cultivation. Not everyone applies direct sowing, strip-til, know-til, etc. Some farmers do deepening, and ploughing. It is important to consider the period of crop termination. If we choose overwintering crops and terminate in early winter or late autumn, we will not have enough time for these crops to make biomass. The vegetation of winter crops is usually associated with rising temperatures and it is no coincidence that their most intensive growth is in spring, not winter.

This is not the case with spring crops. They need temperature and humidity. If sown before the beginning of September, there are high enough temperatures. One rain of about 20 litres is enough to provoke germination and good development until autumn.

Last spring, for example, was extremely cool, and in many places cover crops were unable to make the necessary biomass and development for termination. We could not achieve the best possible result. Therefore, when looking for a result in the spring, it is best to sow a combination – of overwintering and non-overwintering. If we look for the result only in the fall, then non-overwintering crops would have better efficiency.

When should farmers choose the right mix to plant?

To sow cover crops in the fall, farmers need to be aware of what to sow in the winter. Then the period is suitable for soil analysis, reading them and preparing a suitable seed mix. Farmers often make the following mistake: they wait to harvest the crop and only then start looking for seeds for roofing. But then the seeds run out quickly.

When it comes to the EPP, which is announced in the spring, farmers need to know in advance which will be their safest crop to sow from the mix. If, for example, rye and vetch are the safest, there should be one wheat and one broadleaf.

A very common question asked by farmers is „When to plant cover crops“, is there a universal rule for this?

The universal rule is that the choice of sowing is related to climatic conditions and weed background! Farmers often make the mistake of sowing the cover crop mix immediately after the autumn harvest. When this happens, this mix must be terminated very early.

Because the weeds are leaving too. These are weeds that have not developed during the growing season, such as wheat, which „suffocates“ them. They „waited“ for the liberation of the areas from it and began to develop after it matured and was harvested.

By sowing cover crops immediately after harvest, we predispose the field to additional weeding if we do not terminate this mix before inseminating the weeds themselves. This often happens during the summer.

We have had such an experience since 2020. What we did was sow the cover crops after the harvest, but we lost the moisture in the soil, and the weeds started to grow. We did not terminate them and in the spring we had serious problems with corn – mostly with buttermilk. He had been inseminated in the summer before the cover crops sprouted. They sprouted after 20-25 litres of rain in early September. They lined up very well and a cover crop with very good biomass was obtained. One part we terminated in the fall, the rest – in the spring. But we had some serious weeds from these residual weeds after the harvest.

It is important to avoid sowing in conditions of very low temperatures and periods of prolonged drought.

Is a situation possible in which there are no suitable conditions and it is too late to sow cover crops?

Here comes the advantage of the mix of cultures. It is difficult to guarantee 100% germination of each of the crops. Therefore, it is good to diversify with different crops in terms of cold resistance, drought resistance, etc., so that we can ensure a good cover.

An example from the past year – we had sorghum in the bowls. It failed to germinate, probably due to the prolonged drought from early September to October 7-8. However, there were drought-insensitive crops in the mix (clover, turnip, peas, rye, saffron) that sprouted well.

When and how are roof crops terminated?

Roof crops are terminated at least 10 days before the sowing of the next crop so that this plant mass can release moisture and transfer the moment when there will be intensive rotting processes. Here is the question of how they will be terminated – whether by incorporation or by chemical treatment with herbicide…

How do you terminate the crops on your farm?

In case there is no possibility for termination with felling, shredder, etc., it is better to treat by chemical means and then sowing or processing – depending on what technology is applied on the farm.